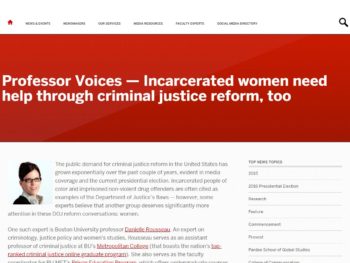 The public demand for criminal justice reform in the United States has grown exponentially over the past couple of years, evident in media coverage and the current presidential election. Incarcerated people of color and imprisoned non-violent drug offenders are often cited as examples of the Department of Justice’s flaws — however, some experts believe that another group deserves significantly more attention in these DOJ reform conversations: women.

One such expert is Boston University professor Danielle Rousseau. An expert on criminology, justice policy and women’s studies, Rousseau serves as an assistant professor of criminal justice at BU’s Metropolitan College (that boasts the nation’s top-ranked criminal justice online graduate program). She also serves as the faculty coordinator for BU MET’s Prison Education Program, which offers undergraduate courses to inmates at area prisons.

Rousseau discussed the need to reform the criminal justice system to better serve women in the following Q&A.

ANNOUNCEMENT: The full program for the Virtual Forum on Anti-Racism & Intersectionality in Feminist Criminology (& Academia) is now available!! You can download the PDF with details on all of our amazing sessions and speakers from our website: https://edspace.american.edu/june42021forum/program/

Join us in exploring the intersection of #yoga and #socialjustice at the 10th annual Yoga Service Conference livestream event, May 7-8. https://www.eomega.org/10th-annual-yoga-service-conference @omega_institute @YogaServCouncil

While I am missing Nashville and in person connections, I am grateful that ResCon was able to move online this year. Tomorrow my incredible research team will present on Community-based Approaches for the Assessment of Sex, Gender, and Sexual Orientation.

You can now access my article for FREE!! It is a quick and informative read on the use of alternative methods (yoga, mindfulness, and meditation) in carceral settings. https://journals.sagepub.com/doi/pdf/10.1177/1078345820953837

Thank you @ECY_Yoga - what great company to be in.

Can you ever have too many books? We are lucky to call some of these authors our collaborators, friends and mentors in what is a sometimes lonely field! @TheoWildcroft @DRousseauPhD @YogaServCouncil
#yogaservice #yoga #accessibleyoga