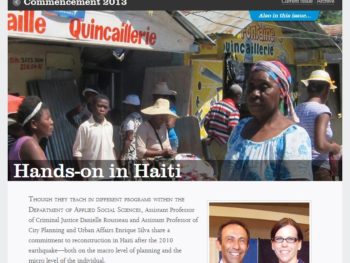 Rousseau, who has spent the past decade involved in victim services, crisis response for sexual assault and trauma, and as a therapist in correctional facilities, focuses on how research informs policy and practice in criminal justice, specifically concerning women and trauma. Her role in introducing yogaHOPE’s Trauma-Informed Mind-Body (TIMBo) program to the female inmates at MCI–Framingham was recognized by the Mass. Department of Correction. The non-profit yoga outreach program trains incarcerated women to be facilitators who can teach yoga and mindfulness practices to other inmates. Recently, Rousseau has been part of an effort to bring TIMBo programming to post-earthquake Haiti in partnership with local agency AMURT–Haiti, and has been evaluating how well the program provides “a positive means of coping for a nation dealing with complex traumas”—from the disaster itself to issues of shelter and safety, to the rape and sexual assaults that plague Port-au-Prince.

ANNOUNCEMENT: The full program for the Virtual Forum on Anti-Racism & Intersectionality in Feminist Criminology (& Academia) is now available!! You can download the PDF with details on all of our amazing sessions and speakers from our website: https://edspace.american.edu/june42021forum/program/

Join us in exploring the intersection of #yoga and #socialjustice at the 10th annual Yoga Service Conference livestream event, May 7-8. https://www.eomega.org/10th-annual-yoga-service-conference @omega_institute @YogaServCouncil

While I am missing Nashville and in person connections, I am grateful that ResCon was able to move online this year. Tomorrow my incredible research team will present on Community-based Approaches for the Assessment of Sex, Gender, and Sexual Orientation.

You can now access my article for FREE!! It is a quick and informative read on the use of alternative methods (yoga, mindfulness, and meditation) in carceral settings. https://journals.sagepub.com/doi/pdf/10.1177/1078345820953837

Thank you @ECY_Yoga - what great company to be in.

Can you ever have too many books? We are lucky to call some of these authors our collaborators, friends and mentors in what is a sometimes lonely field! @TheoWildcroft @DRousseauPhD @YogaServCouncil
#yogaservice #yoga #accessibleyoga